Home » Articles » THE SUPPLY OF FRESH WATER TO GOSBERTON

THE SUPPLY OF FRESH WATER TO GOSBERTON

These days we take so many things for granted, especially a good supply of clean drinking water. In Victorian Gosberton many families had a shared well or cistern and if they were lucky a pump in the yard. In parts of the village this sum persisted until well after World War II.

Many families were not so lucky and had to rely on water from rivers and drains to provide for themselves and their livestock. Small wonder that death from Typhoid and other fevers were not uncommon. My own great grandmother died from ‘Typhoid fever in her early 20’s.

The Risegate Eau was a major source of transportation and also of water for domestic use. In 1898 the water levels in the Eau were so low that there was no water for stock or villagers.

It was therefore a ‘Red Letter’ day for the area when the Donington water company extended it’s water main to Quadring and Gosberton M February. 1912. The bore produced 12,000 gallons of water per day. 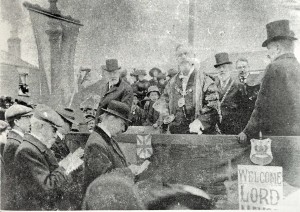 The photograph left shows the opening ceremony which was performed by Sir Thomas Boor Crosby, Lord Mayor of London, a local man who had been born in the Risegate. Others present were the Lady Mayoress, Penelope Everand who presented the bouquet to the Lady Mayoress, Mr E. E. Welby Everard, Mr T. Mills, Mayor of Lincoln, James Eley, Mayor of Boston, the Mayor of Stamford, A. Knott, Mayor of Grimsby, Mr T. R. Caswell, J. E. Butcher and J Bedford, Secretary to the Donington Water Board. In the picture the man with the beard near the flagpole is the Engineer to the Water Board, Mr J. E. Butcher.

This is an extract form The Gosberton Area – A glimpse into the past.