Stephen Smith – It was thought that the main part of the house was built from the stones brought up the Westlode from the monastery at the dissolution in the 1540s ( I found piles of carrved stonework at the south east end of the paddock adjacent to the Bourne Road several years back.

There were 3 large fishing moats around the back of Monks House fed by the westlode and the south part of the house is built with different stone from the middle and north L shaped end AND you can see a straight line in the stonework where the middle part was added with stone from the monastery after the dissolution
The north L shaped end was added in 1680–has later Jacobean windows and a higher roof line.
SO the south end was built to support the Monks fishing to serve the monastery–ie the south end is from approx 12th C  IE much earlier than currently thought and I was told as a boy

The south door was originally the width of a horse cart.  There is a bakers oven in the south end groundfloor room

Thomas Kedbye obtained the house after the dissolution

012 garden to the north and east of the house

011 garden to the east of the house

111 from the north east AFTER roof rebuilt post fire 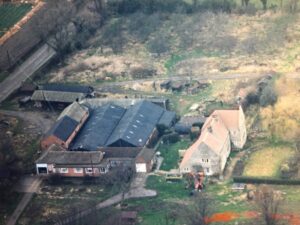 Benjamin Neal 1788-1868, married Mary Cole.  The Benjamin Neal my family is aware of was born Feb. 8, 1849 and married Janie French June 20, 1873.  Are we talking about the same relative? According to the Lincolnshire Directory, Benjamin lived in the Monk House in 1856 and an additional Directory in 1876 indicated he lived there with a Sarah Neal…but there is no Sarah Neal in the Neal Genealogy?

SO WE DO SEE SAME RECORDS FOR A SARAH NEAL BUT EXACTLY WHO SHE IS REMAINS A ?!!
i AM PRETTY SURE THERE IS A GRAVESTONE IN SPALDING CEMETERY FOR SARAH NEAL AND IT HAS CARVED MONKS HOUSE ON THE GRAVETONE  I CANNOT RECALL THE DATE THOUGH–SEARCHING

Sarah Neal 1824-1899  – as mentioned above, the only reference I’ve found so far is that she lived in the House in 1876, and she’s is not in the Neal Genealogy that began with Joseph Neal, my GtGt Grandfather.  Grandpa Joseph was born 1823, married Harriet Hardy, they had 10 children.  GtGt Grandpa Joseph died 1891 at the age of 68 soon after returning to England after a two month visit in the USA  visiting his first son, Joseph, my Gt Grandfather, and his 10 grandchildren in Michigan.  I have a photo of the cabin in which the family lived whose clapboard siding became the frame of the Monk House painting that I think I sent to you already.

Florence Annie Neal  who married Edward Smith 1850-1931  (Florence Annie pre-deceased Edward) Edward is my great grandfather – Florence is another interesting ancestor in the Neal genealogy.  Florence had a sister named Annie.  Florence Annie????  Florence married a guy named Walter Sanders and Annie married two guys, Duncan Ross and Maurice Freeling.  Mr. Ross is reported to pass away whereupon Annie re-married Mr. Freeling.  G
OF YOU LOOK AT THE PHOTO OF THE MAID, BENJAMIN SMITH AND CHARLES SMITH AS YOUNG BOUYS AND THEIR PARENTS EDWARD SMITH AND FLORENCE YOU WILL SEE ANOTHER YOUNER LADY AND SHE SO CLOSELY RESEMNBLES FLORENCE–MUST BE A SISTER

My understanding is that Florence Annie was a niece of Sarah – maybe this is where Sarah came into the picture, but nowhere was she in the Neal Genealogy.  She was referenced living in the House in 1876 along with Benjamin.

Sarah was renting Monks House and the farm from Lord Carrington – is this Lord a Smith?  I HAD A QUICK LOOK AT THE CARRINGTONS AND THE INFO ON THE BANK SPEAK TO A SMITH FAMILY—  BUT NOT THE SMITH FAMILY I STEM FROM!

Edward and his sons Benjamin and Charles purchased Monks House and the farm from the Carrington Estate in the early 1920s after WWI – this Benjamin could not be the same one documented in our Genealogy.  The Benjamin Neal in our line was born some time after 1843-44.  YES, BENJAMIN JAMES SMITH (MOTHER A NEAL)—– EDWARD SMITH AND FLORENCE HAD 2 SONS BENJAMIN JAMES SMITH AND CHARLES EDWARD SMITH MY GREAT UNCLE AND GRANDFATHER, RESPECTIVELY.

Attached is copy of my genealogy back to GTGt Grandpa Joseph.  I’m noted on page 3 under John Joseph/Rose Marie – John Jay.

People who lived in Monks House

My understanding is that Florence Annie was a niece of Sarah

Sarah was renting Monks House and the farm from Lord Carrington 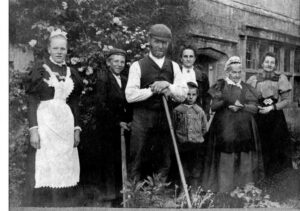 I think the other 2 photos are of Florence Annie Neal 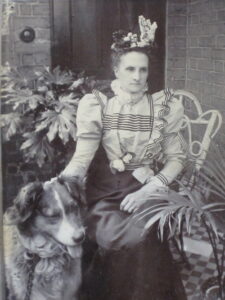 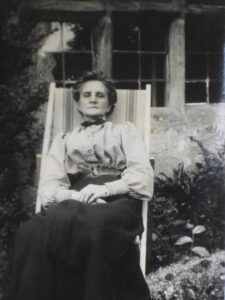 Report of the fire

John E Smith
The timbers in the roof were being treated with a chemical to prevent woodworm as reports were that the timbers were fine and so we were preparing to retile the entire roof
The chemical was highly flammable. When a light was switched on late evening in the upstairs bedroom it caused a spark which ignited the gasses that were still lingering after the spraying
We could hear noise in the roof and the chimney flues upstairs were getting warm

SO I dialled 999 emergency for the fire brigade
We heard the sirens then nothing
I got in the car and floored it up town at 70 mph in the 30 mph restiction to find the railway crossing gates (8 gates on Winsover Rd) just opening after waiting for a train to pass and the fire brigade  then sped 1 mile up to Monks House
They were there and deployed when I returned
A fireman with a large axe asked where the main electricity supply came into the house–He axed the connection cutting all power into the house
Fireman entered via the north door while we were aided by Reg Dobbs and farm workers hauled furniture etc out the southwest door.
The reef and plaster ceilings prevented the fire getting below the ceiling and with the fire brigade kept all damage in the roof.
2/3rds of the roof timbers were destroyed from the north end.
The damaged roof was covered with tarpaulin
We (my mother father and me) with Tina the rough haired terrier slept in my mother’s aunts caravan a few yards to the southwest of the house under the walnut tree in the font paddock –my father towed the caravan from Scopwick near Lincoln

Today does Monks House have cellars

I must say though that having lived in Monks House from 1958-1985 we found no cellars at all!
Maybe there is a goldmine down there somewhere though
BUT I suspect Lord Carrington would have made sure to clean the cellars out before selling the property after WWI ( via agents Carter Jonas in Cambridge) in the 1920s when it was bought by my great grandfather Edward Smith and his two sons Benjamin and Charles 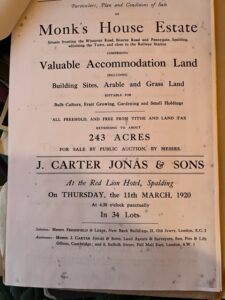 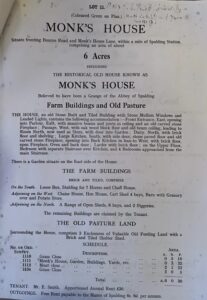 1570 You can clearly see the change in the stone work between the south (left) original part of the house when it was used to serve the monastery by
fishing in the moats a few yards to the southeast –compared to the middle section (right) added to using stones from the monastery after the dissolution in the 1540s. 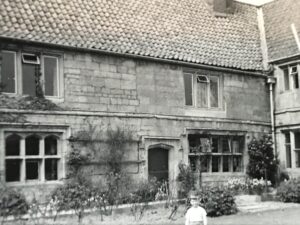