The most interesting building in many of these villages is the Church and so it is with Weston. The village itself, otherwise, appears dull and modern with no buildings of historic interest. However, one or two places should be noted before the reader passes on. Near the Church is the School Building. 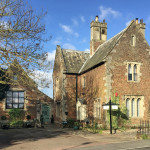 This was built in 1850 out of materials from Spalding Priory, which were bought from the demolition of Fulney Hall. It has excellent Tudor mullions and inside is a Tudor fireplace.

A few yards from the Church, by the roadside, is an old barn.

Pinfold Lane receives its name from the pinfold which used to be in the field next to the barn up to about thirty years ago but was then pulled down. Down the road, signposted to Weston Station, is a crossroads in the centre of which is an old oak tree. This was planted by Mr. Stanley Maples to celebrate Queen Victoria’s Diamond Jubilee. By this crossroads was found the base of the old village cross, now to be seen inside the Church. Down the road further towards the station is Broadgate House. The barn by the roadside here used to be the old Tithe Barn. The back part of the house itself is of considerable age, being once an old shooting box. Inside is a wooden frame within which fighting cocks used to be kept. Otherwise, there is little of interest in the village apart from the Church. 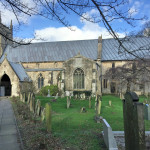 An earlier Church than any part of the present one must have existed here, for Thomas de Mutton, in the reign of King Henry I (about 1135) gave the Church to the monks of Spalding. The nave, the clerestory and the south porch are Early English. The nave arches are massive and pointed, the shafts of the north range being octagonal and the south circular, while each each pier is surrounded by four disengaged, cylindrical slender shafts connected with the base and cap of each. The roof is alternate tie and hammer beam of the Perpendicular period.

The south clerestory of the nave consisted of a row of five single light, round headed windows, with double engaged shafts at the jambs and moulded heads, the two eastern most being altered when the transept was added. The clerestory windows of the north side are plainer than those of the south, having an uninterrupted bold roll banding the jambs and head of each window.

The south porch is, externally, perfectly plain on the east and west sides. Inside, it has something of the appearance of an Early English chapel.

The chancel is Lancer, possibly rebuilt in about 1280. The chancel arch is high pointed and very deeply moulded. There are three bays in each side of the chancel, each with a tall plain Lancet window. On the south side, under the window, there is a Norman priest’s doorway and westward of it there is, thrust in, a tall square headed, two light, low side window. In the east end are three lofty headed windows, set between four buttresses, while above is an elegant quatrefoil window. The roof is tiebeam and post, well timbered and appropriate

The north and south transepts are Decorated, added in about 1350 and 1360. In the north transept is an old and much perished sepulchral slab with the lined effigies of a man and woman indented on its surface.

Both aisles were successively rebuilt about 1380 and the tower, built about 1400, is Perpendicular. The tower contains a large four-light and transomed window and seen through the large tower arch is impressive though, the effect is somewhat impaired by the interrupted ribs in the ceiling and its inclination from the vertical.

The font is late twelfth or early thirteenth century, with its original steps, a broad platform for the priest and a circular bowl with bold foliaged carving. There are a few assorted old fragments of glass in some of the windows and a fourteenth century portrait of the Madonna in the window of the north transept. Also, an iron bound chest, four carved chairs and an oak seat are among the churches other relics. An old coffin lid is to be seen there too, while the lump of stone next to it is thought to be the base of the village market cross. In a case near the west end are two bassoons in use up to 1850, one dated 1814.

Memorial plaques in the church porch. 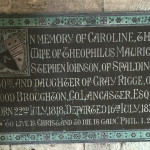 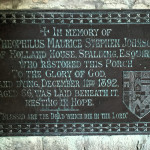 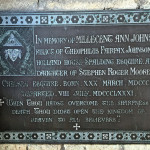