Home » Articles » The story of the SPALDING GENTLEMEN’S SOCIETY

The story of the SPALDING GENTLEMEN’S SOCIETY

This article was written in 1962. By S. W. WOODWARD – Past Librarian of the Spalding Gentlemen’s Society.

EXCEPT for the Royal Society, the oldest learned association in the country is the Spalding Gentlemen’s Society, founded in 1710.

Maurice Johnson, the founder, was born in Spalding in 1688. In London he met many intellectual leaders of the day, including Stele, Editor of the Tatler, Addison, Pope and Gray. He took a prominent part in the founding of the Society of Antiquaries but back in Spalding, Johnson, who was Steward of the Manor, immediately called together a group of gentlemen to a weekly coffee house meeting at which The Tatler was read and discussed.

The original minute book shows how this group rapidly made rules and formed themselves into a regular society for ” supporting mutual benevolence and their improvement in the liberal sciences and polite learning.”

They took in The Spectator and other papers, corresponded with learned men in England and abroad, many of whom consented to become corresponding or honorary members. One of these was Isaac Newton, Lincolnshire’s most illustrious son. Others were Sir Hans Sloane, who later founded the British Museum; Dr. Stukeley, the famous antiquarian born at Holbeach; and other members of the Royal Society; Samuel Wesley, Richard Bentley, perhaps England’s greatest classic scholar, and John Perry, engineer to Czar Peter the Great, who retired to this district, and drained Deeping Fen.

There was also the famous engineer George Vertue, Johnson’s friend, who designed the society’s book 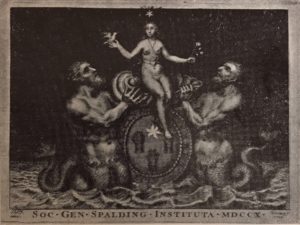 plate. This depicts the birth of Venus, arising from the sea supported by two Tritons to symbolise the Fenland reclaimed from the sea. In between, the shield bears the Arms of the Earls of Chester and Lincoln, used by Spalding Priory.

It was the early custom for members to give a book to the society’s library on election. The present library is very large and classified on the Dewey system, but the original library is in process of being shelved separately, as are also five other magnificent collections on Theology, Heraldry, Lincolnshire, Mathematics and Ornithology. By the will of the founder, the Headmaster of the Grammar School is the librarian. In the long room are the most valuable manuscripts and books of which it is only possible to mention here: a Caxton, a 13th century illuminated Bible presented by Collins; a Second Folio Shakespeare; and the Register of all local families by Sir Lawrence Myntling, monk Friar, dating from about 1420.

The Museum also includes an immense number of exhibits ranging from the local and trivial to the important and universal. There is a rare specimen of La Blon’s tapestry depicting the head of Christ presented in 1727, and a Lovell manorial brass purchased in 1745 for 8/ -, which excited a great deal of interest when shown in the Society of Antiquari’s in 1960. A more macabre exhibit is a box containing gallstones extracted from a patient in St. Thomas’s Hospital in 1729 by a Mr. Chesilden. The fate of the patient is not disclosed!

There is also a large collection of coins and tokens, of weapons and articles used in Fenland sports, implements used for growing and harvesting the typical Fenland crops of wold and flax are also shown. There is some lovely silver and an enormous stamp collection of some 20 volumes.

The Society has loaned to the Urban District Council its large collection of stuffed British birds for exhibition at Ayscoughfee Hall in Spalding, and of foreign birds and eggs to the City of Leicester Museum. Recently the society has acquired the fine Löwenthal collection of mainly Chinese hardstones, ceramics and glass. This and many later exhibits are due to the generosity of the late Mr. Ashley Maples, for many years Secretary and then President. Its latest acquisition is a collection of Romano-British pottery presented by a member, Mr. J. C. Mottsop, fruits of his excavations over some 20 years on a site near Holbeach St. Johns.

I do not want to give the impression of a Society passively existing to house a Museum and a Library, however magnificent. On the contrary, it is very lively and active, numbering nearly 300 members. A handful meet informally every Thursday to pursue their private interests, be it coins, genealogy, heraldry or local history. On eight Fridays throughout the winter there are lectures on a wide variety of topics, and on a ninth a lecture on the Fine Arts endowed by the will of the late Curator, Mr. George Bailey.

We still obey the principals of our founder who wished the society to deal with “Antiquities and Natural History all arts and sciences. and exclude nothing from our conversation but politics which would throw all into confusion and disorder.” May we remind those pathetic people who would complain that there is nothing to do in the provincial towns of that motto from Ecclesiasticus on the title page of our first minute book— If thou hast gathered nothing in thy youth, how canst thou find anything in thine age? “