Home » Articles » The Curse of the Tiddy Mun

The Curse of the Tiddy Mun

FOLKLORE ON FRIDAY – The Curse of the Tiddy Mun

Lincolnshire is a large rural county in the east of England, and while it’s landscape may be extremely flat and lacking in scenic features such as towering crags or rolling hills, its folklore is as rich and diverse as any other part of the British Isles. Today it is an area boasting huge fields and farmlands, but things weren’t always this way. Many of its fields are recent additions to the landscape, land from the waters by dykes and drainage; and once it was a very different place, a land of  mists and streams, of  mires and marshes. Folklore is often intimately connected with the local geography, and naturally Lincolnshire’s transformation from fens and wetlands to large flat farmlands is reflected in the local legends.

Just like other areas of this green and sometime pleasant land, Lincolnshire has its own local species of faeries and associated lore. Old tales from the fens speak of a peculiar breed of pixie-like folk known variously as the Greencoaties, the Yarthin or the Strangers, but most commonly called the Tiddy People. Their name is thought to come from an old local dialect in which ‘tiddy means simply ‘small’. However it has also been suggested that ‘tiddy’ actually derives from an Old English word ‘tydd’ meaning ‘tide’, for as we shall see they had a close association with the fens and the water levels. Folklorist EH Rudkin in a 1955 article reports them as being described thus –

They be tiddy critturs, no more than a span high, wi’ arms an’ legs as thin as thread, but great big feet an’ hands, an’ heads rollin’ aboot on their shoulders

from Folklore of Lincolnshire: Especially the Low-Lying Areas of Lindsey

Like most faeries the Tiddy People were strictly speaking neither good nor evil, and demonstrated the usual capriciousness of elvenkind; sometimes kind, sometimes mischievous, occasionally cruel. It was said they helps crops grow, pinched open the buds in spring and it was a great honour if they came into your home and warmed themselves by your fire. Rudkin records that large flat stones in the county were often called ‘stranger stones’ as it was believed that the little folk danced upon them. Furthermore, in keeping with general faerie lore, folks would leave offerings on these stones, traditionally the first fruits of a harvest, to keep in the good offices of the Tiddy people.

Related but separate from these local pixies were tales of the Tiddy Mun. Said to be about two or three feet high, this being appeared as a little old man with white hair and a long beard, who dressed in grey (which made it hard to see him), and whose laughter sounded like the cry of local birds such as the peewit or lapwing. According to some, the Tiddy Mun was the king of the Tiddy People, but more generally he was acknowledged to be the guardian of the fens and wetlands, with mighty powers over their waters and wildlife.
For example when the waters rose too high and began to creep into the houses of the folks who lived in the fens and carrs (as such wetlands used to be called), the people who go out chanting –

Which means “Tiddy Man without a name, the water’s through!”. And when they heard what sounded like the cry of a peewit, they would know the Tiddy Mun had heard their plea and the waters would begin to subside. Like many such spirits, there was a dark side to the Tiddy Mun; it was said that missing or drowned folks had been taken by the Tiddy Mun. And when appealing for his mercy, it was claimed that the wails of those he had taken could be heard. 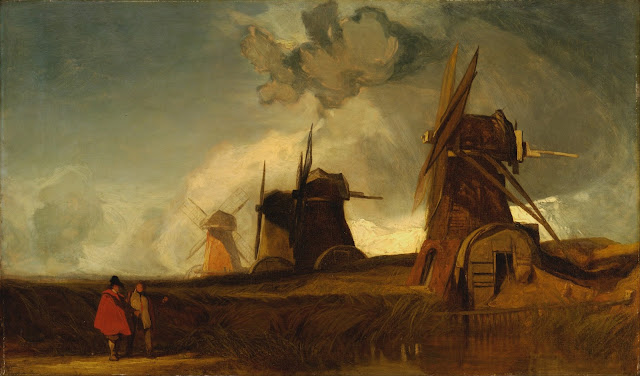 Drainage Mills in the_Fens, Croyland, Lincolnshire by John Sell Cotman
However relations between the mortal folks and the mysterious Tiddy Mun turned very sour when in the reign of King Charles I work began to drain the fens. The king called upon Dutch engineers, who knew a thing or two about reclaiming land from the waters, to supervise transforming the carrs and wetlands in rich, flat farm fields. The locals weren’t keen on “the dutchies” coming and invading their lands, but neither was the Tiddy Mun, who grew angry that his marshes and fens were being emptied and dried up. Several Dutch engineers mysteriously vanished, and folks said that the Tiddy Mun had spirited them away in revenge.
However the drainage work continued, and the Tiddy Mun became furious and laid a curse down upon the land. Ponies became lame, cattle sickened, lambs died, pigs starved and milk curdled. Walls began to crack and houses tumble down, and worst of all, disease fell upon the people, with ague and malaria striking down many. most commonly the children. The locals recognized that all this was the wrath of the Tiddy Mun, and so began to make offerings of fresh water to him. Seemingly this did the trick, things began to settle down and the truce was maintained with offering being made every new moon, when folks would go to the dykes and pour in water chanting –

And while the locals continued this tradition for a good while, it was generally thought that the Tiddy Mun vanished with the fens, never to be seen or heard again.
Now at first this appears to be a fairly standard story of appeasing local spirits as the local landscape is altered. One does not have to be terribly cynical to think that maybe it was aggrieved local lads who were really responsible for the disappearances of the unfortunate Dutch engineers, and the curse of the Tiddy Mun no more than an exaggerations of the disruption and upheavals involved in the drainage work.
However folklorists, particularly Darwin Horn in his article Tiddy Mun’s Curse and the Ecological Consequences of Land Reclamation published in the journal Folklore in 1987, have suggested that there may well be more fact in the old legend that is immediately recognized. Indeed much of the curse does relate to likely consequences of radically altering the local geography. The livestock that had grazed on wetlands plants were now getting fed on the oats, rape and wheat which were being grown on the new fields, and the sudden change in diet could well have led to sickness. Likewise draining the land could have widespread consequences – the lowering of the water table would cause subsidence leading to the cracked walls and damage to the little houses of the fen folks. Similarly horses and ponies that had grown up on the soft and wet fields of the fens and carrs would indeed suffer lameness from walking on the now dry and hardened earth – and tellingly larger breeds of draft horse soon replaced the ponies on the newly created fields.
Even the disease of the curse may be traced to the ecological changes for the drainage projects. Medical records from the time do actually record a sudden rise in ague and swamp fever, which doctors of the time attributed to the great amounts of decaying vegetative matter dredged out of the fens, left to dry in the sun releasing larger amounts of toxic humours into the air. However a more likely explanation is that the change in habitat saw an increase in the populations of mosquitoes and flies which carried diseases such as ague and swamp fever. Of course, children were much more susceptible to illness and at the time of the draining of the fens, child mortality was still very high at the best of times.

In fact, nearly all the elements of the Tiddy Mun’s curse can be seen as the results of the large scale ecological changes wrought by the draining of the fens. In fact it is only the reported curdling of the milk that we cannot link to the consequences of the drainage operations. However ruining your dairy products is something of a traditional piece of faerie mischief, so it is no surprise that it was appended to the other effects of the curse.

So then, much like the legends of other water dwellers like Jenny Greenteeth, the curse of the Tiddy Mun reflects something very real, recording in stories the impact a huge change in the local landscape had upon the people who lived there. It’s very telling too that the Tiddy Mun vanished, not only as his habitat disappeared but also as the old rural ways of life in the fens were replaced with a new agricultural system. The old Tiddy Mun, who may have began life as a local spook or faerie, with these radical changes to the Lincolnshire countryside, certainly grew into what it was always said he was, the embodiment of the very spirit of the landscape.

The Tale of the Holbeach Gamesters