There is written evidence to suggest that there was a chapel here in 1259, when the Prior of Spalding 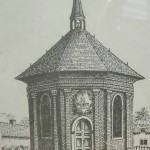 and the Vicar of Moulton took issue with Sir Thomas de Mutton for having unlawfully erected a Chapel within his manor and conducting services there without authority. The population of the surrounding district was increasing at this time and several chapels were erected for the new villages. Many of these would have been built of timber and thatched with reed and would not have survived for long. However, during the restoration work he presided over in 1866, the Rev’d J Russell Jackson reports finding 13th century fragments.

It is recorded that in 1410 a Roger Welby of Moulton bequeathed a small legacy ‘for the repair of the fabric of St James’ in Moulton’ with a request that a mass be said on his behalf. And in 1495 a Joan Welby bequeathed another sum to repair the Chapel.

Entries in the parish register record the baptism of the twin children of William and Katherine Miller, curate of the chapel in 1622 and a marriage recorded in 1631. After the civil war which ended in 1649 all records cease, so it can be presumed that it was destroyed during this time.

In 1722 the present chapel was built as a Chapel of Ease probably looking much as this print suggests. The stone inscription over the door- is in Latin but translates as:

‘Christ, the beginning and the end for all eternity: To the Father, the Son, and The Holy Spirit: of his own free gift, Johnson, the donor rebuilt and restored, in the year of the salvation of men 1722’

The story is told that Maurice Johnson was riding through Moulton Chapel one Sunday and noticed a number of men idly congregating together. He asked them why they were not at church and they replied that their church was 4 miles away and that was too far-to walk. He then resolved to build them a chapel, which he did, and endowed it with a rent charge of £16 a year- upon his estate and his son John became the vicar of Moulton in 1755.

The octagonal chapel was built of red brick with stone dressings in the Grecian style. The octagonal high pitched grey slate roof was topped with a leaded spirette and a cross mounted on an open bell turret. The bell bearing the date 1814 was provided by the then incumbent William Moore. Inside, the church contained four sets of box pews with a central stove as shown in this photograph taken from beside the altar looking towards the stairs.

In 1886 the chancel was added at an expense of about £400 and the box pews replaced with the current ones. When the Bishop of Lincoln, Bishop Edward King, consecrated the restored building as the church of St James on 25th October 1886 it had a simple cross rather than a spirette and looked much as it does in these photos. It became an ecclesiastical parish in its own right, granted by Queen Victoria on the 7th May 1890.

At some point the pulpit was replaced and the walls were exquisitely papered or painted.

The organ was initially in the gallery until the organ chamber was added in the 1920’s at a cost of £68 and the vestry was added in 1926. A new spirette was later put in place but the cross came down during a storm and has not yet been replaced.

The statue of our lady was blessed in 1936 and in 1946 the 1886 pulpit and lectern were removed and later given to a blitzed church in Chelsea and the oak screen was installed by Captain and Mrs Clark in memory of their son Alfred Howard Mayhew Clark who was killed in action at Cekhira on 7th April 1943. It was dedicated on Passion Sunday 1946. The stained glass windows at the East end of the church were installed in memory of other villagers who died in the great war.

The worship was in the catholic tradition at this time with a Sung Mass and Evensong followed by Benediction. In 1953 the vicar announced that there would be no benediction until Whitsun as a concession to those who did not like the use of incense.

St James had a full time incumbent until 1975 when Father-Reginald Thompson retired. Father Thompson was a colourful character remembered for his love of wrestling and for keeping a horse in one of the rooms in the vicarage as much as for his priestly duties!