This is an extract from Spalding History by G C H Smith dated 1966.

In Saxon times, Pinchbeck was an important place attached to Crowland Abbey during the Middle Ages it was a market town; but today it is no more than a large village. Before Spalding rose to ascendancy as a port, Pinchbeck was the most important town in the area. Market Way is on the site of the old Market, while Guildhall Drive marks the site of the Guildhall. The original stocks can be seen in front of the Bull Inn itself a fairly old institution. The eighteenth century workhouse is now a private house at No. 17 Church Walk, with its building date incorporated in one of its walls, the walls themselves being fourteen inches thick. The Manor House, the earlier part of which is Elizabethan, was at one time a public house with a thatched roof, while at another time an underground passage is said to have been built, running from it to the Church. It is one of the original manor houses of the area, along with what is now the Constitutional Club at Spalding. The Vicarage dates from some time before 1750, having a fire plaqueon the wall numbered some 2000 less than one at Boston, known to be of 1750. 0tway Hall, a moated mansion, was demolished in 1806 and the present building erected.

At Pjnchbeck Marsh is to be found an ancient steam engine, used for pumping water. The building is

dated 1833 and the engine was designed by Watt, though it is one of six without his name on because they were made by another firm. An interesting contrast is made with the modern electric pumping engine.

The Church, also, contains several features of interest. The tower, south porch and clerestory are fifteenth century. The lower stages of the tower lean but it contains a lovely west doorway with a cinque-foiled arch, a leafy hood and a niche, probably for some saint, on each side.

Outside the porch is an unusual wooden sun dial and within is a doorway with four shafts on each side, supporting an elegant trefoiled arch, clothed with carved flowers, its crocketed head crowned by a finial. The clerestory has ten three-light windows on each side under traceried parapets lighting the nave roof supported by ten angels holding shields with the arms of the Pinchbeck family. The nave, chapel and north aisle roofs are fifteenth century. The north aisle has an old doorway, now blocked up and windows containing angels and saints in old glass. The chapel has a restored fifteenth century chancel screen and a window with a collection of old fragments of glass. The nave arcades are thirteenth century and the chancel and its north chapel fourteenth century, though much restored. The brass of Margaret Carr in the chapel is Elizabethan and 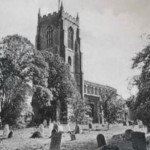 the marble tomb of Edward Walpole dates from 1725. Sir Thomas Pinchbeck, whose tomb is in the north aisle, is said to have given the nave its roof and clerestory.

The finely carved font is fifteenth century. There is also a stone which is part of the pre-Reformation altar and has two of its five crosses; an old weathercock struck by lightning in 1893; a wrought iron candlestick of date 1750; and a little wooden shelter used by the priest at funerals and mentioned in records in 1725. In the vestry is a table of date 1642, while the oak door of the bell chamber dates from about 1500.