A photo of Littleworth Station, in the village of Deeping St Nicholas. The line was built in 1848.

The station was closed in 1961 but the line through the station remained open for passenger trains until 5th October 1970 and re-opened on the 7th June 1971 for Peterborough-Spalding services. The intermediate stations, including Littleworth, were not re-opened. 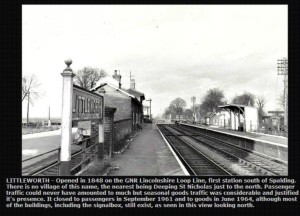