Staff at Spalding Railway Station with a 77mm German field gun which was brought to the town by rail for an exhibition on the 23rd March 1916. This gun was captured at the battle of Loos, which was described as one of the first genuinely large scale British offensive actions of WW1.

More information on the battle of Loos can be found on this link which i found interesting –http://www.greatwar.co.uk/french-flanders-artois/memorial-loos-memorial.htm 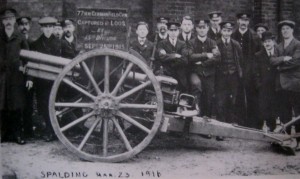