There was a Memorial Dedication and Unveiling Ceremony for Pilot Officer George Furniss on Monday 27th September 2021 on a small, grassy area close to Two Plank Bridge in Spalding. 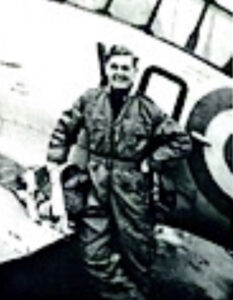 The Stonemason who built the new World War 2 Memorial in Ayscoughfee Hall Peace Gardens added a memorial plaque to George Furniss, a member of the RAuxAF, to a brick pillar which had been erected on the site.

This was because Pilot Officer George Furniss tragically died on September 27th, 1953, near that site, sacrificing his own life to prevent a greater disaster befalling the residents of Spalding. Whilst on a training exercise from RAF Finningley, he managed to manoeuvre his fire-stricken Meteor jet aircraft away from the built-up areas of Spalding, but in doing this he was forced to eject at too low an altitude to make sure of his own survival. His parachute failed to open and he came to rest in Two Plank Lane, at Mr Sutterby’s farm house (which has since been demolished). His plane crossed the Vernatts and landed in the late Mr Darley’s family’s farmyard.

He left a wife and twin daughters, who were one years old. 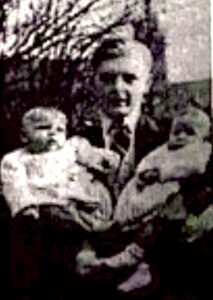 Pilot Officer Furniss’s daughters and some other family members attended the memorial service, along with representatives from the RAF and RAuxAF from around the country, as well as RAF Padre, local members and people who helped to arrange the ceremony. They were joined by Anthony Fell and St Nicholas Community Brass. Steve Wand played The Last Post and The Reveille.