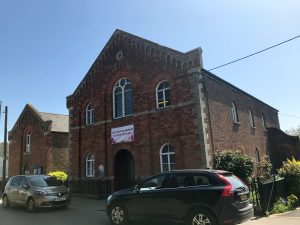 Old Main Road : Fleet Hargate : Spalding : Lincolnshire : PE12 8LL
A few details about the church and its background as you look around the 2018 Flower Festival

It is thought that a gathering of Christians first began to worship in a meeting house here in 1681.

The 17th Century was a time of turmoil for Christians in England. They were expected to adhere strictly to the rules and governance of the Church of England.

This gave rise to the resistance of ‘dissenters’ or ‘non-conformists’ who were active in Gainsborough in the early 1600s. 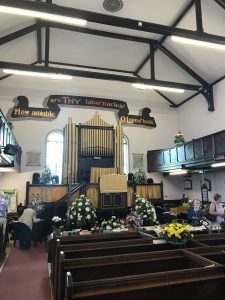 The supreme authority for non-conformists in matters of belief and conduct is the Bible.

The Pilgrim Fathers who subsequently emigrated to the New World in search of religious freedom, from Plymouth, had earlier set sail from Boston but were apprehended and imprisoned in the Guildhall for their offences.

From the fellowship at Fleet, in the early 19th Century, Baptist fellowships were planted in Long Sutton, Gedney Hill, Sutton St James and Holbeach.

This chapel building dates from 1876 and is in typical Victorian style.

A foundation stone can be seen outside at the front of the building.

A matching exterior front was constructed to the adjacent schoolroom building, which is of earlier date.

In the ground floor of this earlier building – The Stables Hall – rings used to tether horses in days gone by, can still be seen in the wall!

The gallery was added to the chapel sometime in the early 20th Century, to accommodate the increasing numbers of worshippers.

The pipe organ was installed sometime later in the 20th Century. 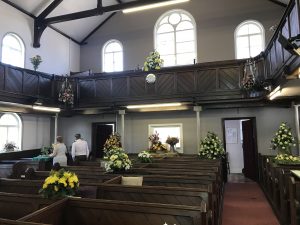 The centre, front space of the chapel is taken up by the ‘pulpit’. This is traditionally the focus for the preaching of the Word of God, the Good News of the Gospel.

Originally the pulpit was behind, and overlooking, the ‘baptistery’.

When the pipe organ was acquired, a space had to be found for it. This was done by bringing the pulpit forward and supporting it over the baptistery. The baptistery makes possible, baptism by full immersion, for believers who wish to follow the example and command of Jesus to his disciples.

The church celebrated its 335th Anniversary in 2016.

Start of the Baptist Movement in Spalding