When this road was first named Reform Street, it was to commemorate the passing of the Reform Act in 1832. The Act was first mentioned back in 1830. Most of its buildings were erected before 1841.

When Crowland Manor was going to be sold in 1831, there was no mention of a Reform Street, but perhaps it was already in the process of being built. 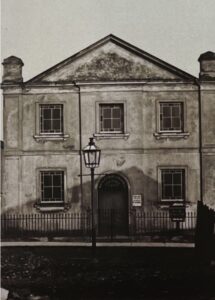 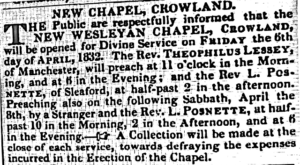 Mr. W. Smith laid the new Wesleyan chapel’s foundation stone on July 29th, 1831. Mr. J. Gilbert, (a local builder with a yard on North Street) built the chapel for £800. It was opened on April 6th in 1832, and the Reverend Theophilus Lessey preached. It was destroyed in 1914 to make space for a new chapel, which opened in February 1915 and is still being used today. 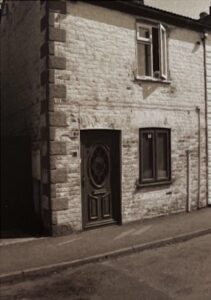 The Plough was first mentioned in the papers in October 1866, when the Stamford Mercury ran a notice stating that the old established beer house (built after 1831) was being put to let:

The new Plough was mentioned in the Census forms of 1851 and 1861, referred to as “The Plough” or “The Plough Inn.” No one is certain when exactly it opened. Many beer houses like this were opened, and usually the male head of the household would be working on the land while his wife ran the business.

In the 1871 census, Matthew Richmond was the publican. At a Spalding Licensing Meeting in 1873, the inn’s licence was not renewed. Nothing else has been found relating to this pub. 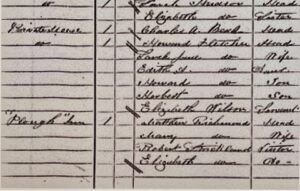