This photo, taken in 1958 is of the Counter Drain railway station at Tongue End. This was a remote station on the route of the Spalding and Bourne railway( later part of the M&GNR ). The station opened on the 1st August 1866. It then closed temporarily between 9 October 1880 and 1 February 1881, before closing permanently on 2 March 1959 although the line remained opened for goods until 1964. 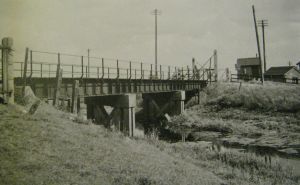