The following is an extract from the leaflet available at the church and some additional pictures. 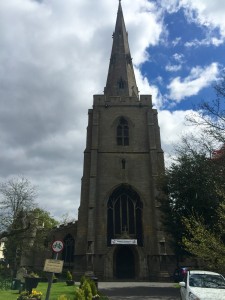 North Porch, most probably an addition in the 16th century, with the two unusual drum towers that may have been remnants from Moulton Castle. Until 1811 there was a parvise (upper room) which housed the Farmer Free School. Notice the two side doors and the corbels (small blocks of stone projecting from the wall) the remaining evidence of the room where local antiquarian, William Stukeley, was educated and left his mark by a carving in the wall. 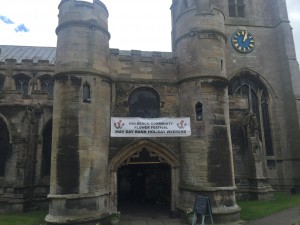 Lady Chapel that was consecrated in 1912.

The stained glass windows, well worth a careful study, date from the late 19th century to 1951 and are wonderful memorials to people who have served the parish so well in bygone days, such as Canon Hemmans, Vicar for 40 years from 1872 — 1912; William Rippin, the inspiring blind watch-maker; and several members of the Willders family. They depict, in the main, familiar bible stories and are crafted with rich colours and intricate symbolism. The flowing, spectacular tracery (ornamental stonework) is evidence of the superb Decorative style of the medieval period.

The pulpit, erected by Canon Arthur Brook (Vicar 1865 —1872) as a memorial to his father. Look upwards and see the wooden angels that were paid for by Arthur Brook’s brother. A further angel was erected at a cost of £15, but taken down again and burnt as it was never paid for! The wooden roof was completely replaced in Victorian times. You will also see, high up, two stained glass windows, depicting saints. It is possible that the intention was to fill all the Clerestory windows (above nave walls) with pictures of saints. 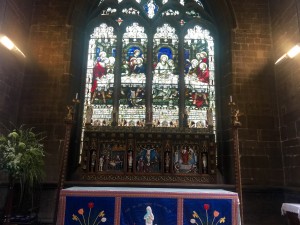 Chancel area, this part of the building being originally paid for by the Bishops of Lincoln and refurbished extensively from Victorian times onwards. As you enter the area look upwards and admire the Rood-beam (horizontal beam above entry to Chancel) put in place as a Memorial to those local people who died in the First World War; their names, together with those who died in WW11, are on stone tablets at either side of the Chancel. The door high in the wall originally led to a Rood Loft and this is where musicians would have played their instruments for services until the early part of the nineteenth century.

The first organ of more modern times, built by Walker, was placed at the West end of the Church, but this was replaced by a Kirkland organ in 1886 at the east end of the south aisle. This was then reconstructed by Compton in 195o, with the addition of a choir organ, paid for by a bequest from Miss Dorothy Carter. Sadly in the late 197os the organ was reconstructed and various pipes taken out and shipped to different churches in England. This work was carried out by Groves of Nottingham.

The Reredos (decorated screen behind the altar) is a memorial to Canon Hemmans and was designed by Wilfred Bond. Behind the altar is the only stained glass window in the Chancel, depicting the Last Supper and is one of several Willders’ windows in the church. A Trust fund exists to maintain these windows. The choir stalls and communion rail are nineteenth century additions as are the ornate Piscina (niche containing a stone bowl) and Sedilia,(decorated stone seats for priests) which were constructed in a medieval style. A surprising blocked up doorway would have led to a vestry but this was probably demolished in the mid sixteenth century.

The church many commemorative plaques and by themselves they relate an interesting history of the town and its inhabitants over hundreds of years.

West Ascension Window. It is worth noting the unusual design of the stone structure, which is early 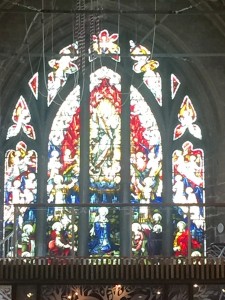 Perpendicular. Observe its shape in comparison with the Decorative period style of the East End Window and note the unusual pointed tracery. The kneelers sitting on the pews are much admired and were made as part of a Millennium project.

South door and porch you can see the choir vestry constructed in 1984 and round the corner the splendid glass door of the Mary Bass Room built in 1996 Mary Bass was a local landowner who left a trust fund which was to be used to maintain the fabric of eight churches in the area. 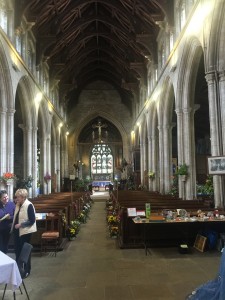 Nave you need not be concerned about the pillars which lean outwards, as they are safe, but remind us of the weight that constantly bears down on them. You should also notice that there are variations in the base mouldings (contoured outlines) and capitals (large carved headstones of the columns) which indicate that the western responds (half pillars built against the wall) were built first, with the lowest stage of the West Tower. The rest of the arcade was built from east to west, the latest capitals being those of the western responds, by which time the weight of the Tower depressed the base 10 inches and a further drop was caused by the building of the spire.

Now turn to the ceiling of the Tower with a fairly unusual tierceron-star vault (ribs or supports that do not complete a continuous line across the vaulted ceiling) and central oculus.

Two further items are noteworthy : the octagonal Font, with tall traceried pedestal, is one of the oldest fittings in the church and still used regularly today for Baptisms; and the tomb of Sir Humphrey Littlebury who was a benefactor of the building of the church. It was originally located at the east end of the south aisle. There are also in this area the brasses of a headless knight and that of Joan Welby on a tomb chest.

Outside It is worth walking round the outside of the church and looking particularly at the south door and porch which cannot be viewed from the inside. The outside doorway is surprisingly tall. You can also see the bell cote with pointed bell opening and the fourteenth century door has reticulated tracery. Look upwards to see and marvel at the recessed broached octagonal spire with 4 tiers of ornate lucarenes (openings on the flat surface) on alternating sides. Such craftsmanship and dedication were surely a leap of faith when it was constructed hundreds of years ago.

There are more detailed guides about the bells, the organ, the windows and the kneelers. There is also a children’s treasure trail available.