The Land Settlement Association (LSA) was a UK Government scheme set up in 1934 to re-settle unemployed workers from depressed industrial areas, particularly from North-East England and Wales. Between 1934 and 1939 1,100 small-holdings were established within 21 settlements across England.

Fulney was one of these settlement. The smallest of the LSA estates covering only 114 acres. The below shows the location of the Low Fulney Estate. 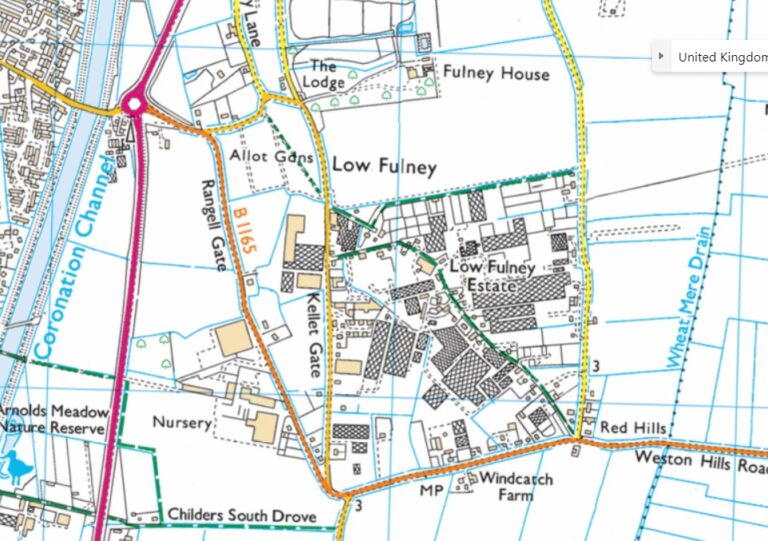 “The Land Settlement Association was a scheme, organised along co-operative lines, as an experiment to provide work for the long-term unemployed from Special Areas set up in the depression. Various organisations, concerned with the welfare of the unemployed, had met in 1933 and had agreed to jointly fund the scheme, providing the government would match the money from voluntary sources. It was agreed that the government would provide £50,000 from their special areas fund and a further £75,000 after that period. The Land Settlement Association was incorporated under the Industrial and Provident Societies Act in November 1934, known by its initials, LSA.

Most of the LSA estates were south of the Humber; there was only one in Northumberland, but Cumberland had three and one at Snaith.

The LSA carefully chose their estates because they required good agricultural land, but in acquiring it they would not put anyone out of work. The objectives of the LSA were given in publicity materials distributed throughout the Northumberland Special Area, where there were many out of work miners. Miners were at first sceptical of the scheme, in which the ‘unemployed could be successfully re-established in life as self-supporting smallholders,’ when few of them had any experience in this type of work.

Each man was provided with a house for his family, a greenhouse, garden, hen houses and a piggery, depending on their preference. Holdings varied between 4 and 11 acres, but each smallholder has to pay a rent and comply with LSA rules. Seeds, plants, tools and livestock had to be purchased from the LSA and all sales were through the association. Here was a centralised packing station and transport was arranged to take the produce to market.

A National Association of Tenants had local representation. Estates could equal a small village of between 200 and 400 people, including families, and Snaith had a total of 40 holdings. The LSA provided all of the facilities needed for running each estate, including the social needs.

Everything was to change with the war. There was then full employment, as anyone out of work was expected to work. Training for tenants ceased and recruits came from the farming community. Only those who had the experience and the necessary capital to start a smallholdings were allowed as tenants. Special loans were arranged for those who couldn’t find the capital.

Responsibility for the scheme passed from the Commissioner for Special Areas to the Ministry of Labour, under the wartime food production programme.

Once the war was over, the Government looked again at the scheme. Under the Education Act of 1947, the LSA was to run the estates on behalf of the Ministry of Agriculture. The LSA was no longer an experiment, but something that worked and was successful, even if it no longer fulfilled the reasons for which it was set up.

In the aftermath of the Brown Committee Report on the LSA in 1960, the agricultural correspondent for the Cumberland News criticised the LSA which he thought needed to be completely overhauled.

“Tenants”, he said, “were given the feeling that they were not working for themselves, but for the benefit of the Government. Whitehall was too autocratic and there were few facilities for tenants to air grievances, except at estate level. Formerly tenants depended on the LSA for technical advice, but the present tenants are mostly men who have made a success as agricultural workers and have saved to enable them to branch out on their own. They are more individualistic and are able to manage without the LSA.” He felt that the tenants could purchase their seeds and stock much cheaper outside the LSA and sell at a more favourable price. 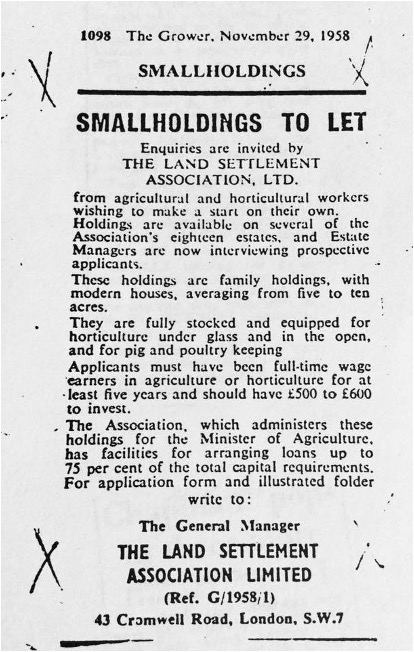 Because of the small nature of the estate there is very little spare land for Centralised Services to cultivate and they have had to attempt to cover their costs entirely from the services which they can provide to growers. This in turn created a problem because of the way in which for many years the growers tended to prefer to follow local traditions rather than to produce the recommended LSA crops. That is to say they were involved in bulb forcing and the selling of flowers. Not only did this reduce the income which the centralised services could achieve, but because they were in the centre of a flower growing area there were many temptations out in the way of a flower growing areas there were many temptations out in the way of growers to sell their produce outside of the Association. These factors have meant that the centralised services have consistently incurred a loss.

The situation as worsened by the fact that the Wise Committee was not convinced that the estate was suitable for inclusion in the LSA Scheme as it was too small to be efficient. They were unable to recruit new tenants for two years and many of the best tenants left because of the threat of closure. However, they began to attract new tenants in 1971 and these were quicker to see the economic advantages of following the Association’s advice on croppings. Production increased considerably and the example set by the new tenants, coupled with low returns on flowers, persuaded several of the older tenets to change their cropping patterns. By the time the Minister had to make his decision the estate was giving every indication that it would soon become commercially viable and the Minister agreed to its remaining in the scheme.

Present cropping is based on lettuce, tomatoes, celery and some Chrysanthemums. Outdoor crops such as lettuce, celery, cauliflower, sweetcorn and leeks are also grown. Some 3 acres of sugar beet are grown in the areas which tenants are unable to crop more intensely.

There has been a considerable increase in the area of glass erected, and all but one of the holdings have been between 1.25 and 1.5 acres. The average area is only slightly below the average for the Association. Average incomes have been poor and the recent change to more intensive production has not significantly changed tis because of the high interest charges incurred by the tenants’ rapid building of capital investment.

The estate is by no means clear of its problems but they are currently hoping to build a new packhouse and as the remaining holdings are let and the full production resulting from the intensification is achieved there is eery reason to believe that the estate will achieve financial independence in the next 2 or 3 years.