3D Printing is offering the potential to change how we design and manufacture. At the Forge we believe it offers a new way of working which compliments the tradition of Blacksmithing.

Giving another dimension to learning and give rise to the next generation of Engineers, Designers, Entrepreneurs, Artists and Industry Innovators.

The process of capturing Customer need, then design, manufacture, delivery and feedback can be realised. The 3D Printing manufacturing process is seamless allowing the user to modify, change the design, tailor sizing, add additional features using a variety of materials ranging from traditional plastics in solid or transparent colours.

The Forge offers two 3D printers and a Sense Scanner.

Dudley is a Digital Artist. However I often refer to myself as a creative due to the fact I do a lot more than just digital art work.
I got into digital art in 2008, there was an online group who wanted to make short animated movies and they were asking for 3d modellers. I wanted to join but had never created anything in 3d before so over the summer I taught myself how to 3d model and by September I joined the group primarily as a weapons modeller. For 3 years I worked on modelling a large amount of medieval through to futuristic like weapons totalling something around 100 different models, keeping in mind I was doing this all in my spare time. I eventually made my way up to lead modeller and art director of the group before I decided to leave and look into 3d art for games. Around that time I started teaching myself 2d graphic design as well as 3d design. Through my day job I ended up working briefly with the museum in King’s Lynn to produce some stop animation work with local children which resulted in me meeting a member of the Court of The Convention of The Baronage of Scotland at the exhibit. I then started working for him as a freelance graphic designer working on his heraldry. In 2016 I got my own 3d printer and started learning all about the process as well as putting my modelling skills to use creating items to be printed, shortly after that I began volunteering at the chain bridge forge as a designer for 3d printing and since then have taken on commission work for the Spalding Gentleman’s Society as well as people around the local area.

Examples of the items Printed at the Forge

HCVS stands for Heritage Craft Virtual Simulator and is a project which is being lead Dr John Murray of the University of Lincoln and Chain Bridge Forge is a partner to this project.

The project aims to revive the Blacksmith craft, making it accessible to young people, by using 21st century technology. The project uses an Oculus headset to create the environment of the Forge and a Xconnect to translate the hand movements used in Blacksmithing. This is processed by bespoke software to create a virtual image. This image is sent to a 3D printer where it replicates the 3D image and produces the item for the user to keep as a memento of their experience. This project will allow schools to bring back these crafts in a new and safe way.

12th June 2015 Another visit to the University of Lincoln today, Dr John Murray and Will Sawyer showed us the latest developments in the Heritage Craft Virtual Simulator. The simulator gives the user a virtual experience of Blacksmithing.

Today Ashley got his first opportunity to enter the Virtual World of the Blacksmith. He can be seen using tools to fashion a piece of virtual metal.
https://youtu.be/PerAEuflT-A
The view through the Oculus Headset is shown below. 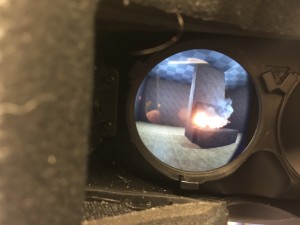 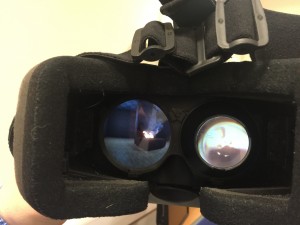 The project is funded by the Heritage Lottery Fund and a system will be available at the Forge and we hope to take it to all the local schools so young people can experience this virtual world.

The Forge will offer the following services:

Demonstrate HCVS simulator and 3D printing at the Forge and outreach to local venues and schools.
3D printing HUB to schools and local businesses offering an in-house 3D printing capability
Where the requirement exceeds the Forge capability then the Forge will offer the services of trusted partners.