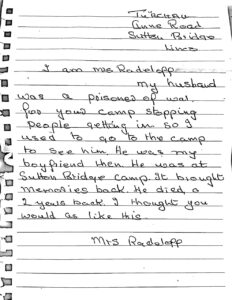 Ivan Bateman : “It is apparent from reading the newspaper reports from the time that preparations for War were in full swing well before the actual declaration in September 1945. ARP trial blackouts and other military exercises were taking place in this, and other areas, all over the country.
After the Camp officially closed in 1954, the huts were dismantled and the land returned to pasture and agricultural use.”

Sandy: “My father was based at this camp. Although he died in 1986, my mother is still alive and can remember a few things about the camp, including the fact she spent her wedding night there!”

Clare: “I remember it being logged somewhere on the internet briefly, as I was looking for info about a camp which was on The Rec ( Lime Court). My nan said there was one there as used to sometimes carve/make little trinkets in exchange for food bits. She lived on Alexandra Road.”

“My grandad was a POW there, and I’ve got some photos of him and others at the camp – some of them were taken when they were POWs, but others look like they might have been taken later during a reunion. (There are also) photos taken at another camp, probably in Italy, where they were held before coming to the UK. 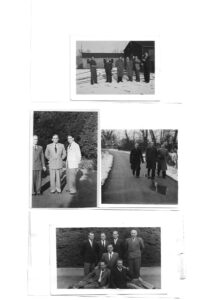 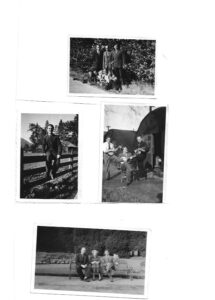 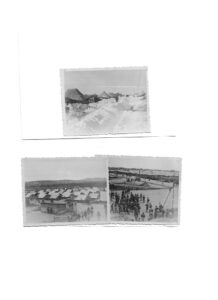 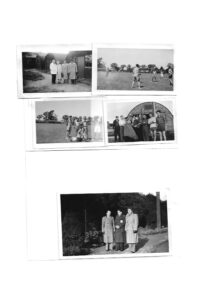 My grandad’s name was Tony Czura (1919-2011). I’m not sure who all of the other people in the photos are, but Peter Kohut, Stephen Dribniak, and Joe Aftalak (not sure on the spelling) are definitely among them.”

Anonymous: “I’m afraid I don’t know anything about it. It was never mentioned at home as a child, other than my Dad was there as a POW and most of them worked on the land settlement and that was how my Dad met my Mum when she was in the Land Army. I remember sitting on a child seat on my Dad’s bike crossbar when he and Mum cycled down there and seeing  lots of buildings and being told my Dad used to live there. Shortly after my Dad got an allotment near ‘4 winds corner’ which was sort of ‘in front’ of where the old camp was situated. After my Dad learnt to drive, when I was about 6, he would take Mum and I to the allotment and we would often drive round to the old camp to take produce to an old Ukrainian POW friend of my Dad’s called Mike Dembiki who apparently  still worked on the Land Settlement, but had married an English woman and they lived in a double fronted house with a front garden full of carnations. I never knew if Fulney Camp and the Land Settlement were two different names for the same area, or were two separate places. The person Geoff needs to ask about Fulney Camp is Joy Albans who was one year below me at Spalding High School, she worked as a manager on the Land Settlement and knew about the POW camp. She knew several of the ex camp members (who my Dad used to mention in general conversation when I lived at home) who worked on the land and later at various Van Geest locations.
My Mother always told me never to mention anything to do with the war to my Dad as it had traumatised him badly and would bring back memories he needed to forget. I do know he was one of the youngest P.O.W.s at the camp, and believed for the rest of his life until his death in 2013, that his elder brother Mikaelo had been killed in the war, and around 2017 I believed I had traced evidence from a passenger list on a sailing from Liverpool to New York to show his brother had survived the war and been sent to Pingley P.O.W. camp near Brigg, only 68 miles from my Dad. I believe, online, there is an association of ‘Friends of Pingley Camp’, who have links to records of all the old P.O.W. camps in the UK. Details of the sites, accommodation, even lists of prisoners, and what happened to them as the camps disbanded.
My Dad had a close friend called Alec Jalowczuk (pronounced yellow chuck) all through the war, they left the Ukraine together, and were both frontline stretcher bearers when initially captured from the Ukraine by the Russians, then they stayed together in German Concentration camps until they came to Fulney. Alec married Thelma and they lived in Queens Road, Spalding. To the best of my knowledge Thelma is still alive, so she would be the best person with first hand information about Fulney camp. They have 2 daughters, Christina, and Anna (now Anna Davies, who is a few months older than me and went to the High School when I did). Christina speaks Ukrainian fluently, and they’ve been back to Ukraine often as have traced their roots back there. I still have contact with both Joy Albans and Anna Davies, both still in south Lincolnshire. Even towards the end of my Dad’s life whenever I tried to talk about the war, and his past, he would change the subject, or become agitated and depressed. It honestly was a ‘no go’ subject in our house, best not to mention at all.”

Antony Wright: “My Grandmother married a POW from that camp. His name was Adolf Weber and they lived in Willow Walk. – I have just one vague memory of him as he tragically died in a motorbike accident in 1963 when I was 3. He was in the parachute regiment, and I have his original German birth certificate that was found in Germany and sent by the Red Cross after the war. His parents were killed in allied bombing raids, which is probably why he stayed in Spalding. I would love to know more about the POW camp. I have a few treasured photos of him if you are creating any form of photographic archive. Good Luck with your research. 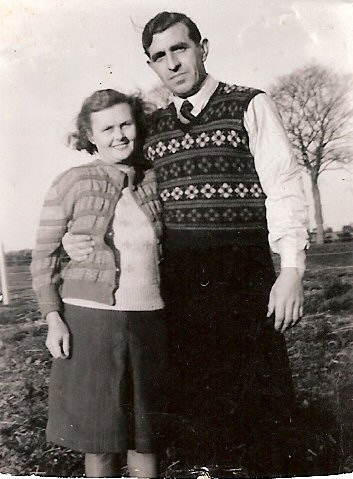 The lady was my Grandmother, Ivy Louisa Winyard, then Wright, then Weber.”

Keith John Seaton: “Remember it as my father delivered bread to Fulney Park to Mr Chatterton who lived in the Park house later it was the home of H or J Van Geest, In the late 1950’s the Spalding Rover Scouts were given one of the huts for the Scout camp site in Pecks Drove and took it down then put it up again at the camp site.”

Andrew Hill: “WW1 German soldiers from Fulney camp who died of influenza were buried as a group in Spalding Cemetery. Their remains were eventually moved to the German War Cemetery in the Midlands.”

Alan Corcoran: “My dad was based there.” 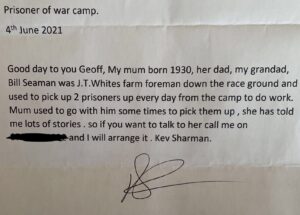 John van Geest: “I understand that you are researching the Prisoner of War camp known as Fulney Park. I currently own the land on which most of, if not all of, the camp was built on, and can recall the buildings which were still standing in the late 1950’s / early 1960’s. Unfortunately, I do not think I have any photos of the buildings.

One thing that did happen to one of them, is that Spalding Rugby Club dismantled one of the prefabricated wooden buildings and re-erected it on the Memorial Field as their Club House – and a jolly good Club House it was!

I have done a little online search myself as to the history of the camp over the last few years, and have found a number of references to it, as well as old postcards from inmates being sold on ebay. I do question whether some of the articles I have seen are totally correct, especially with regards to the exact location of the camp.”

What was life like for POWs in the UK?