Cover picture is a copy of Stukeley’s original drawing 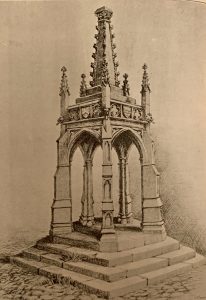 HOLBEACH HIGH CR0SS.—The scholarly author of Murray’s Handbook for Lincolnshire, in his brief description of Holbeach, alludes to the Parish Church; to the Hospital of All Saints; and to the High Cross. All three were situated in near proximity, and he says, “they must have formed a remarkable architectural group.” The glorious Parish Church happily remains, and in its external features, presents much the same appearance as it did five hundred years ago, except that the mellowing influence of time has softened and subdued its venerable aspect, and added a richer hue to its grey stone. The Hospital of All Saints, built immediately opposite the North side of the Church on the site now occupied by the Chequers Inn, has completely disappeared—no stone remains in situ—and it is much to be deplored that no drawing, plan, or elevation of this 14th century building (so far as I have been able to ascertain) is now in existence. The High Cross—or Market Cross, as it is frequently styled—has also disappeared. In this case, however, we are fortunate in possessing Stukeley’s drawing—roughly executed and much out of perspective—which enables us to form a fairly accurate conception, not only of its general design but also of its details. From this imperfect sketch, the accompanying illustration has been prepared, but no undue liberty has been taken with the design.

A careful examination of the constructional thrusts will show that Stukeley’s building would be of doubtful stability. This has now been rectified. The buttresses and arches have been given their proper measures so as to carry the groining with safety, and the structure generally has been depicted with some regard to perspective. For much valuable aid in recovering the plan and correct proportions, and for the drawing itself from which the photographic reproduction has been made, I am indebted to my friend, E. W. Cox, Esq., of Liverpool. The interest which has of late years been re-awakened in the architectural works of the middle ages must be my apology for an attempt to keep alive the memory of this unique and picturesque relic of my native town. The Cross which I propose to describe was the successor of an earlier Cross. Of this earlier Cross we have indeed very little authentic information. We can however approximately fix the date of its erection and the causes which led thereto. In the year 1252 Thomas de Multon, lord of Holbeach and Egremont, obtained a licence from King Henry Ill. to hold a Market and a Fair at Holbeach. The Market was to be held weekly on Thursday, and the Fair was to last two days, namely, on the Eve and the day of St. Michael. No mention of, or allusion to, a Cross has been found in any document previous to that date.

About twenty years later, during the reign of Edward 1., a Special Commission was issued for the purpose of taking certain Inquisitions which are contained in what are known as the Hundred Rolls.” From these documents it appears that the Prior of Spalding had a Fishery on the river bank, and that he could levy ‘(a toll as far as the Cross of Holbeach.” This clearly proves that in the year 1273 a Cross existed, and that it was a landmark sufficiently known and recognised to be referred to in an important State Document. We may, I think, not unreasonably conclude that when the lord of Egremont obtained the Market (1252) he also caused the Market Cross to be built. As to its form, size, and ornamentation we cannot speak with any definite exactness. Those crosses set up in early times were generally both in intention and design far more simply and correctly crosses than those of a later date. Often remarkable for size and altitude, and ornate in detail, they strictly preserved the cruciform shape, and to this the architectural decorations were always carefully subordinated. Erected to commemorate the establishment of a Market at a time when chivalrous lords were returning from the Holy Land, the stones of this ancient Cross may have been worn by the knees of that nameless Crusader who founded the Saracen’s Head.( A hamlet a mile and a half from Holbeach, on the Old Sea Bank.) Be this as it may, it formed a fitting companion to the venerable Norman Church which then existed. It stood a silent witness to its fall, it saw the consecration of the first stone of the new church, it watched all through that busy building period until finally it beheld the noble parish church much as we see it today. The old order was rapidly giving place to the new, and in its turn, after an existence of less than two centuries, it fell before the restless spirit of the age.

We know that the glorious parish church was fully completed before the close of the 14th century, and we can well imagine that many of the masons who had been employed on this great work would still be living in the town some of them had probably helped to quarry and convey the stone from Barnack and they must frequently have seen some of those superb Eleanor Crosses which the old people of that day would remember being built. Within the county at Lincoln, Grantham, and Stamford—and in the neighbouring county at Northampton and Geddington Eleanor Crosses had been erected. Thus within easy distance, five of these magnificent structures existed, and were attracting universal attention amongst the building fraternity. The restless building activity which characterized the period, and the desire to emulate the architectural works which were then progressing, is quite sufficient to account for the demolition of the old Cross and the erection of a more elaborate and stately structure in the fashion, or architectural style then prevailing. As to the exact position it occupied, it is difficult to speak with absolute certainty. It may have stood at the extreme N. W. angle of the churchyard, on the site occupied by the present Market House, but the weight of evidence would rather point to the opposite side of the river, to the house at the corner of Church Street and Spalding Road. This was formerly the old Market House. It certainly stood very near to the Bridge, which crossed the river at this point High Cross Bridge it is designated in all ancient documents. Standing there at the intersection of five roads it would have attracted the attention of the traveller in whichever direction he journeyed. Let me then, as briefly as Possible, give some account of its form, architectural style, and of its ornamentation and enrichment.

Its form was pentagonal, and it stood on a pentagonal Calvary of three steps. These steps were all plain, though it is not at all uncommon to find in similar structures, the lower steps benched for the accommodation of the market people. On the uppermost step is the platform of the Cross—a pentagon with canted angles. From this platform rise five massive buttresses, divided into three stages by plain set-offs. The plinths are moulded, and the outer face of the buttresses are ornamented by paneling, each panel being finished with pointed arches containing trefoiled cuspings. The inner faces of the buttresses are worked into attached vaulting shafts, with moulded bases and caps. These with the buttresses carry a groined roof with moulded ribs—the vaulting cells correspond to the five moulded arches connecting the buttresses. The spandrels are decorated with trefoils. Above this is a plain cavetto moulding carrying the parapet. This parapet is bold and effective, divided into three panels by vertical bars. The centre panels in each face carry shields of arms. On the two shields depicted in the view are sculptured the arms of De Multon Argent, 3 bars gules— and the arms of Holbeach——A Chevron, engrailed. The two panels on either side of the armorial panel contain circles enclosing quartrefoil cuspings. From the upper set-offs of the buttresses rise square pinnacles, which are set diagonally. They are ornamented at the lower moulding of the parapet with gurgoyles, through which a water-drain issues. The pinnacles rise above the parapet, and terminate with richly crocketed gablets, crowned by a carved finial.

Above the parapet, and from behind it, the roof rises in two steps, or tiers, carrying a pentagonal spire elaborately crocketed at the angles. This is surmounted by a large sculptured capping, which has the appearance of having been intended to support a statue or some heraldic animal, such a finish being more common in secular work than a cross, although the latter would have been more appropriate.

The whole structure is a masterly composition. It exhibits that style of architecture which characterized the early years of the 15th century, to which date its erection may be attributed. For simplicity, for dignity, and for elegance of design, it had few rivals. Can any reader of Lincs. N. to S furnish authentic information on the following points ? (a) Date of erection ; (b) Date of demolition ; (c) Site.

PS: I wonder if anybody was able to answer the questions?