Counter Drain railway station was a remote station in Lincolnshire serving the village of Tongue End. It was on the route of the Spalding and Bourne Railway (opened 1866), later part of the Midland and Great Northern Joint Railway which ran across East Anglia to the Norfolk Coast. The station opened with the line on 1st August 1866, closed temporarily between 9th October 1880 and 1st February 1881, and closed permanently on 2nd March 1959, although the line remained opened for goods until 1964. The three intermediate stations between Spalding and Bourne had unusual names, because there were few nearby settlements; “Counter Drain” was the name of a drainage ditch close to the station. 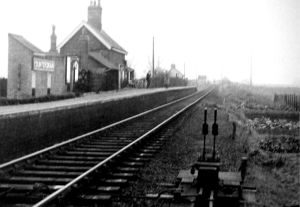