Grandfather Herbert Seaton came to Spalding at the age of 14 to learn the trade of Baker.
By the year 1901 age 19 he was employed at Bates Bakery, 18, Winsover Road, Spalding as a Journeyman Baker. Soon after this at the beginning of the 20th Century he took over the Bakery in Willow Walk behind numbers 2, 3 & 4 Commercial Road. This is not so long after Mr George Robert Dodd, Blacksmith, had taken over the Chain Bridge Forge in 1898 so they would have been near neighbours and acquaintances.
In the photograph in my brief history of Spalding Port, No 4 Commercial Road is the 3 storey building with the shop front on the ground floor with the bake-house chimney rising up behind this.
Grandfather married Edith Ada Vine the daughter of Captain John Henry Vine, owner and Master of the vessel “Breeze” in the same photograph. Captain John Henry lived at 36, High Street, a few houses along the road from Mr George Robert Dodd.
In 1907 my father Ralph Seaton was born, George Banks Dodd was born in 1901so they would have known and been acquainted with each other from an early age even though Banks was 6 years older. A photograph taken on the ice on Cowbit Wash, possibly in the 1930’s (as my father married my mother, who is also in the photo in 1933,) shows them together. 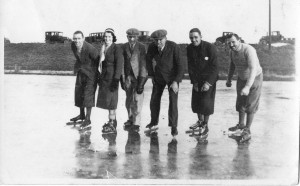 I still have grandfathers and fathers racing skates that they are wearing in the photo and Geoff Dodd told me he still has his fathers.
Grandfather& father most certainly would have supplied bread to the Dodd family and likewise the Dodd Blacksmiths would have done work for them. There were stables in the yard opposite the bake-house in Willow Walk but I cannot remember there being any horses in them in my time. I have looked through some of the Forge Day books from January 1913 to 1940 and found many entries for Seaton, most of them for shoes so there must have been a Horse and Cart being used before WW2.  Some entries for feet, I have been told that they often only had shoes fitted to two of the horses feet sometimes but the hoofs still had to be trimmed from time to time. Also a great many for the repair or shafting of a Peel, that was a long handled flat spade like tool that was used to put the tins of bread dough into the large oven and to take them out again when the bread was ready.  Also repairs to the oven door, scales mended, hand cart mended, barrow wheel mended, and many other small repair jobs. My father as the oldest son also became a Master Baker and worked with grandfather both baking and delivering bread to customers both local and to the farms and other dwellings down Marsh Road beyond Wykham as far as Wragg Marsh and to Weston and the Land Settlement. There were no more entries in the day books for shoes after 1928 and the next book started in 1937 so I have no idea when they finished using a Horse & Cart. I can remember grandfather had a covered handcart that he delivered bread in to the more local customers.
I don’t remember what vehicle was used at the beginning of the WW2 but remember we had a Morris 8 (FXY 937) around 1945 and linen sheets were put over the back seats and in the boot so that it was able to carry bread to customers. During WW2 they continued to work together as Baker was a reserved occupation so father was not called up for service but was a member of the local branch of the Home Guard. I lived with my parents and older brother at 24, Albert Street until the war ended when granddad retired and then we moved to live at the premises at 4, Commercial Road, when father took over the running of the bakery.
I went to the Westlode Street School, crossing over the Chain Bridge and back twice a day, passing close to the forge each time and often stopping on the way home to see Horses being shoed. Eventually I was allowed inside and remember watching Banks Dodd making horse shoes and fitting them and even pumping the hand bellows for him before the mechanical fan bellow was fitted. When I visited the forge he would say to me “Come on Steve” after the cartoon in a daily newspaper. I am not sure why as this cartoon character was a cart horse.  We always knew when Horses were being re-shod as our Irish terrier would come home with pieces of trimmed off hoof which she spent hours chewing on. Banks Dodd was also in charge of the winding handle which was used to swing open the Chain Bridge to allow Birch’s tug and barges to pass through to the Mill on High Street and back later on the return journey to Fosdyke. The bridge swung round to end up alongside the back of the forge and I was allowed to stand on it as it was swung round on at least one occasion.
When at age 11 I left the Westlode Street School and moved on to the Gleed Boys School  I was delighted to have Metalwork as one of my lessons as having watched Banks Dodd working in metal this appealed to me as a future occupation. I made a Tea caddy spoon in brass, a fire poker, and a wind up garden line in my first year and was looking forward to more ambitious projects in the next year but was then disappointed to find that I had to take up Woodwork. However I soon found this to my liking and after leaving school found employment in the timber trade as a wood machinist and eventually at the end of 40 years in the trade finished as a Sawmill shop floor manager.
I worked at W. Grooms Sawmill behind Plowman’s Flour Mill in High Street from 1954 and cycled home past the forge every day until the new Sawmill was built on West Marsh Road. By then I can only remember the shoeing of Horses taking place on a few occasions.
I was away doing National Service in Malaya during 1960 & 1961 so have no memories of the forge during that time but do remember Geoff working on the first of his many frameworks for the Tulip Parade Floats in the early 60’s outside the forge and actually on the road.
Keith J Seaton.

To download the PDF of this document click this link: AOS D 0001 Chain Bridge Forge and the Local Bakery