Spasmodic conversations had been taking place on how best to celebrate the club’s 100 years of activity.

Documentation had shown the club forming in 1921, but recent research revealed the club had missed the birthday boat by quite a few years. 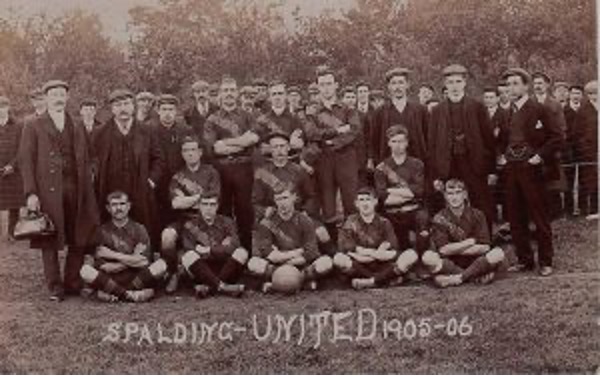 Spalding United 1905-06 in their black shirts with red sashes.

A chance sighting of an early photograph (top right) on social media prompted some investigation and evidence showed the club was formed way back in 1905.

Press reports from the time also substantiate the earlier kick-off for the club.

“A meeting of the recently amalgamated Fulney Institute and Victoria clubs was held at the Black Bull on Saturday evening when it was decided that the name should be Spalding United and Mr J. Bowditch was chosen as captain and Mr W. Bourne as vice captain. Mr F. Parker was appointed secretary with Mr A. Measures assistant and R.M. G.R. Barker elected as treasurer.

“A non-playing committee was chosen on which the following were asked to serve: Messrs H.L. Enderby JP, J.W. Gleed, W. B. Crampton, Stephenson, George, G. Baker, J.H. Measures, J. Bright and W. Warby. The Low Grounds ground has been secured and the colours will be black shirts with red sashes.”

It was proposed to run three teams, a first and second 11 on Saturdays and a Thursday 11.

“The new club should prove to be a strong combination.” 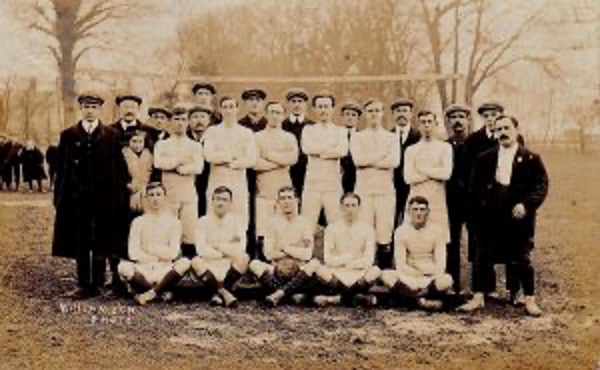 Postcard sent to Mrs Rocher at the Red Lion Hotel, Alford, on February 23 1910 and the strip had changed to all white.

“Trophies won were the Peterborough Junior Cup and the Victory Cup,” said a report.

A crowd of 4,000 saw an FA cup game defeat away to Boston. It was also mentioned in the report that the club was buying a second-hand building which it intended for a multitude of uses, including changing facilities.

* Thanks to Reuben Holmes for research and John Wakefield for the photographs.