Tydd St Mary established in late 1916 or early 1917 as a Home Defence airfield for night patrols.
The airfield was not much more than a cleared field probably located to the north east of the village of St Mary’s Marsh. It had few facilities apart from a few Bessonneau hangars and huts.
Tydd St Mary was used by 51 Squadron, whose headquarters was at Marham “B Flight” was established at Tydd St Mary in the summer of 1917, and a variety of aircraft types were flown including FE2Bs. These were replaced in late 1918 by Sopwith Camels. The Flight remained at the airfield until May 1919 when the Squadron moved to Suttons Farm. The airfield closed soon after. 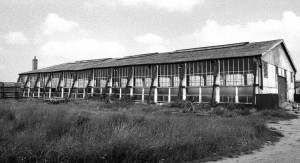