Another  couple of Geest outings, one has the names of the twelve in the photograph noted on the back. From left to right as you look at the photograph. R Rowell, A Busley, Mr Bristow, Mr Lowis, V Green, B Fairbanks, Len van Geest, S Coe, H Gilbert, Mr Cobb, P Robson and G J Hurling. 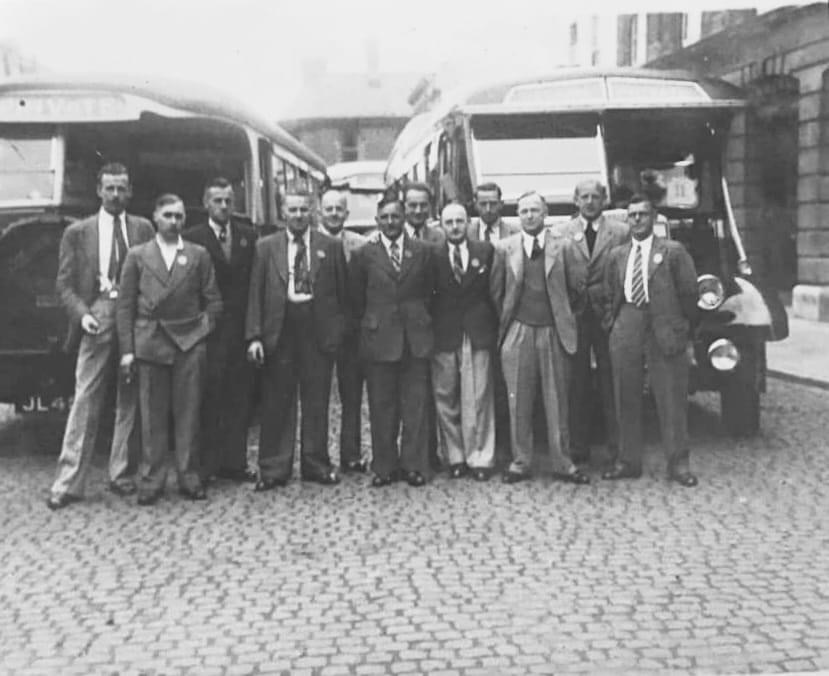 Mr Rowell was General Manager of Geest truck factory. Offices originally in Spalding, West Marsh Rd. Bill Jeffries was Gen Manager of W Groom, timber pallet and box makers , at the same time. Same office block.
Both. Companies were combined to form Geest Industrial Group Ltd.
Reg Rowell was one of the first persons employed by the Geest Bros.
Both Mr Rowell and Mr Jeffries had a huge influence in my career with Geest- from Grooms to ,eventually, The Industrial Group in Boston.
Both real gentlemen!

I agree with you Ron, got on well with Bill Jefferies, remember when out phone rang one ring and new it was him calling. Reg lived in Welland Terrace if I remember correct, did a lot of work with wood for his house when it was being built near Pinchbeck corner in Iroka hardwood, a teak type wood.

Ron Rolfe Any idea of the year it was taken. I started at White House as office junior in 1954.Mr. Rowell was highly regarded by alll levels of staff.

Dad, Harry Leggett was a painter and decorator (had a shop in Commercial road back in the late forties) He had the contract to paint Len Van Geest’s house and yacht, I can remember dad taking me to work with him on the boat.

I went on an outing with my workmates to see Tom Jones at the Palladium I was about 16 I think, we all worked at Geests in the bulb department Jean Tooley;was in charge.

The Down Your Way Radio Team visiting Geest