Rex Stanley Pitts was born in 1930 in Doncaster, the only child of Hilda and Stan Pitts and spent the first few months of his life in Doncaster before moving to their family home in Little London, Spalding.
At a very early age it became obvious from his sketching and drawings that he had an extra-ordinary talent, a talent which was to make him well known locally as an artist and sculptor.
He attended Goodfellows School where he apparently played truant as often as possible, preferring to sit in a field and draw sketches! He then went to the Gleed Boys school before moving on to study at Doncaster Art School.
On returning to Spalding he worked for a short time as a fireman on the railways, and was particularly fond of the Flying Scotsman and so was thrilled when his aunt Eva married the fireman of that famous steam locomotive.
Rex was proud of the fact that he spent his National Service in the Cold stream Guards.
In Spalding he worked for a while in the drawing office of the electricity board, and then for Grooms. This firm was taken over by Geest Industries, and Rex worked for many years in their publicity department, designing many of their famous logos during the 1960s. His later working life was spent in the Planning Department at South Holland District Council.
In 1952 Rex married Betty Holehouse, only daughter of John Robert Holehouse (known as Jack) and Dora Evelyn Holehouse née Nix (known as Doll).
Together they had three children, Nicolas, born in 1956, Susan, born in 1963 and Rachel, born in 1970. He doted on his two grandchildren Zoe and Marc, and would have been overjoyed to know his other three grandchildren: Raphael, Etienne and Juliette.
Rex was a highly respected artist in the area, well known for his water-colours, oil paintings and sculptures – one of which hangs on the south wall of the chancel in the parish church of St Mary and St Nicolas in Spalding.
Rex joined the choir of Spalding Parish Church in 1962 as a tenor, and this became an important part of his life for almost 40 years. He will be remembered for his over enthusiastic rendering of Guide Me O Thou Great Redeemer and his love of the big anthems – I was Glad and Zadok the Priest.
He displayed his artistic talent to thousands of people visiting Spalding for the annual flower parade in the 1960s when he was commissioned by Canon Jakeman to produce seven vast paintings to illustrate the Te Deum. These were displayed around the church and one of these paintings – the nativity scene – survived – to be displayed on the Corn Exchange and later the South Holland Centre each year at Christmas until quite recently.
Rex designed their family bungalow in Grange Drive, and helped to design the Burtey Fen Collection at Pinchbeck, drawing the plans for the building.
His regular haunt was the lounge bar of the Bull Inn in Church Gate, and most nights he could be found there putting the world to rights with his many acquaintances and friends. His dry and often cynical sense of humour was unique, and he could well have taken the part of Spike Milligan in the 1950s Goon Show.
In 1987 he came home from work one day complaining that his hand wouldn’t work properly when he tried to draw a plan. This was the first of several strokes he was to suffer, and the beginning of his many frustrations. He was unable to make the fine intricate movements required in his drawings and paintings, and he became annoyed with himself – and everyone around him – when he could not achieve the perfection to which he was so accustomed. From then onwards his health gradually deteriorated, and he spent the last three and a half years of his life in nursing homes.
Rex will be remembered as a loving and devoted husband, father, grandfather and a Spalding ‘character’, and his legacy of paintings and sculptures will be a lasting memorial to his outstanding artistic talent

Mike George – Rex did his National Service in the Coldstream Guards, and later trained as a locomotive fireman, based at Spalding Station. After that he worked for Geest Bananas as an artist for many years, and I remember him telling me that he’d scream if he ever had to draw another banana!
Then, some time in the late 70s or early 80s he tried to make a living as an artist, and he had a studio in a room above what was Halfords store. That didn’t work out, so he took a job with Spalding Urban District Council, I’m pretty sure in the planning department, which is how we came to have our conversation about the pill box. We used to meet in the Bull in Church Gate, where we were both regulars at one time, but I lost track of him when I switched my allegiance to the Mail Cart. 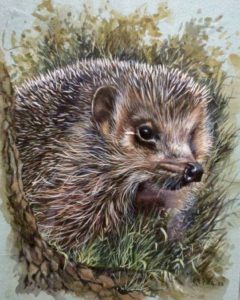