The history of Monks House is some what vague. Standing beside the Bourne Rd.,  about one and a half miles west of Spalding, the Tudor Mansion is now surrounded on three sides by modern housing, but until the 1980s the house stood in its own grounds, with orchards and farm buildings close by.

It is thought that the granary of Spalding Priory was originally on the site, and was given up to Henry VIII along with Spalding Priory at the dissolution of the monasteries in 1540s. A man named Kegby was given the job of disposing of the Priory stone, and it is reported that he built himself this present mansion on the site.1574 the will of Richard Kegby, yeoman, refers to property purchased from the Queen’s Majesty as “my mansion house called Monk’s House”.

By 1615 it was described as one of the eight highest rated properties in town.

In the 19th century Monks House was part of the estate of the then Lord Carrington, but in 1920 Mr e Smith bought the house together with 91 acres of land for £10,900 in public auction.

The house must have presented a fine site in its earlier years with a moat on three sides and the river Westlode flowing past on the fourth. Behind the house were large orchards and fields.

In the 1930’s the house had its own tennis courts, and a Monks House tennis club was formed.

On the night of the 9th April 1974 Monks House was badly damaged by fire. The house which is listed as a historic building, was undergoing extensive restoration work at the time of the fire – work which included the retiling of the roof.

The fire which broke out in the roof destroyed about one third of the rafters, and three bedrooms were completely gutted before the blaze could be brought under control. If it had not been for the upstairs bedrooms having concrete floors the damage would have been a lot worse.

During the summer and autumn of 1974 the repairs and restoration to Monks House went ahead, and when when completed the building looked superb,

time of the fire 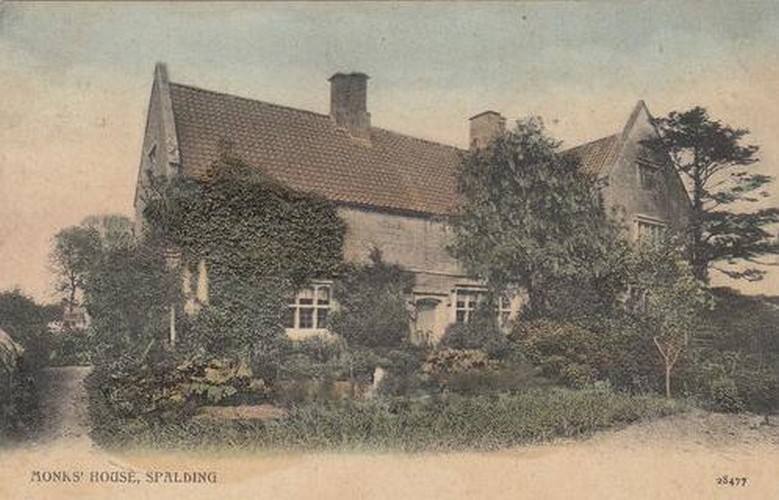