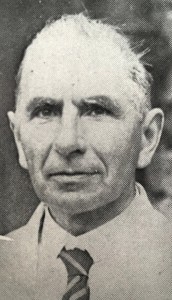 George Adams is a well-established family-run firm of butchers in Spalding, Lincolnshire. George, was 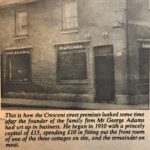 born in 1882 and started off his work life at the age of 13 as a butcher’s apprentice. In 1910 George started the business in the front room of the cottages in The Crescent, Splading. He started with just £15 capital serving the people of the town with quality meats and handmade pork pies. A traditions that continues today.

ln 1910 the business was started with £10 capital, from a butcher’s shop in the Crescent Spalding. This is the same premises we operate out of today. We have a copy of the original accounts book which shows the first purchases made by George Senior. 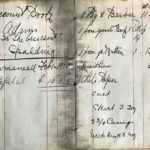 Although clearly an excellent business man he obviously wasn’t so good at accounts as the first entry dated 1st Feb 1910 is one of only 3 in the book over a span of a couple of weeks!

In those early days, most butchers did their own slaughtering and George Adams was no exception. One of the rooms above the Spalding shop was used to produce the hand raised pork pies and other products for which they gained a wide reputation. These pies were made entirely by hand and involved the raising of pastry around a mould, which was then left to set slightly before being filled with fresh meat and seasoning covered with a lid and then sealed. This traditional process is still followed today. This increased recognition, the business expanded until in 1918, a pork shop was purchased in Winsover Rd to handle the increased demand.

Growing consumer demand led to the formation of a company which became a large-scale food manufacturer focusing on pies, sausages and cooked meat manufacture. 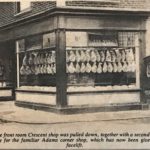 In 1923 – 2 major things happened to the business, the shop in the Crescent was modernised and still looks the same today. Also, a postal service for the traditional pork pies was introduced enabling the Geo Adams brand to gain considerable renown outside the Lincolnshire county leading to increased market growth.

By 1925 the increased demand enabled the purchase of a slaughter house on New Bond street in Spalding, previously the slaughtering would have been done at the shop. Amazingly this abattoir was used right up until 1963. 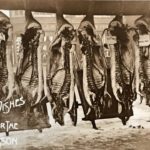 Although George 2nd joined the business in 1939 it was after the Second World War Mr. George Adams’s two sons George and John set about developing a business that operated from two butchers’ shops under war rationing. This was an era of great change, both socially and scientifically, also economically.

The business expansion was driven by acquiring butcher’s shops in the East Midlands, Lincolnshire and Norfolk and supplying them with meat and meat products from Spalding. By 1963 the company had 20 butchers shops as well as slaughtering and manufacturing in South Lincolnshire, many homes were serviced directly from completely unrefrigerated vans!

In 1957 a modern factory was built behind the shop in The Crescent, the remains of which are still there today. There they produced pies and sausages for the retail outlets as well as the growing van sales business which supplied home and businesses.

The early 1960’s also saw more changes in the shop in the Crescent when again it was adapted for the increase in trade. This latest change saw the removal of the “throne like cage” in which the friendly cashier Mrs Mary Thorold resided.

It was in the mid 60’s that the company took another great leap in scale with the opening of a new abattoir at Fulney Lane Spalding. Moving the business towards wholesale and away from retail.

The new abattoir was both large and modern by standards of the time and beef, lamb and pork were slaughtered and killed for many regional butchers as well as sold on the hook. Most meat was despatched in carcase form in non-refrigerated lorries.

Also During the 1960’s the first van sales depot at St. Neots was built and the first fleet of refrigerated vans were introduced.

But the big change was in 1969 with the purchase of Ruskington Foods near Sleaford as a sausage and pie factory and significantly up scaled the operations, which had outgrown the premises behind the butchers in Spalding. ‘The factory had been built in 1926 for the production of bacon as a co-operative and subsequently bought by the Brighton family for the production as Ruskington foods making pies and plum bread before it was acquired by George Adams.

Then in 1974 Pendennis Factory at Frampton was a smaller purchase but it had some good equipment although it was primarily making frozen dough for home baking at that time. This factory eventually ended up producing cooked meats. Van selling of the meat products continued to flourish.

Moving into the 1970’s the changes became more apparent as the supermarkets gained a foothold in the High Streets, the company served one of the supermarkets via 12 of its stores with beef, lamb and pork and imported New Zealand lamb and Chinese rabbit for them. They were demanding customers but quickly developed the buying power.

However, as the marketplace evolved and the multiple retailers grew we could see the demise of butchers’ traditional business. Good butchers were hard to secure and the supermarkets poached them to run their meat counters. We started to close the shops and concentrate on manufacture and distribution. A decision that proved crucial to today’s success. In the mid-seventies, a computer was introduced!! which again was replaced by a quarter million new model in 1982. Over these years George and John took up the positions of Chairman and Managing Director respectively and the next generation moved in. Mark Adams who was managing director of the fresh meat side of the business and a director of the Adams pork products. He later went on to run the company.

In 1981 the business acquired a pig farm at Colsterworth expanding its operations. The farm started with 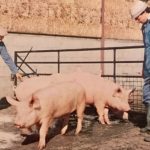 The 80’s and 90’s saw us increase pig slaughter 10-fold and a reduction in beef and lamb. We developed the boning and packing of both fresh and frozen meat of various species. During the 80’s, Ruskington benefitted from major capital investment as we developed our Lincolnshire sausage and pork pie business.

1985 saw the company celebrate 75 years of food retailing and production which was celebrated by Princess Anne visiting Spalding. 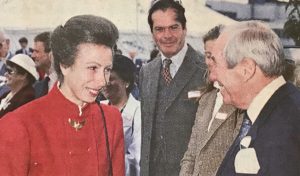 The remainder of the shops were eventually shut, apart from The Crescent shop which still thrives in Spalding.

Today George Adams Retail still operate from the Crescent in Spalding. The company is operates by the mutual granddaughter of George and Dick. Mary and Lizzi and trade by the name Adams & Harlow. They still use the finest ingredients including 100% British Meat.