HCVS stands for Heritage Craft Virtual Simulator and is a project which is being lead Dr John Murray of the University of Lincoln and Chain Bridge Forge is a partner to this project.

The project aims to revive the Blacksmith craft, making it accessible to young people, by using 21st century technology. The project uses an Oculus headset to create the environment of the Forge and a Xconnect to translate the hand movements used in Blacksmithing. This is processed by bespoke software to create a virtual image. This image is sent to a 3D printer where it replicates the 3D image and produces the item for the user to keep as a memento of their experience. This project will allow schools to bring back these crafts in a new and safe way. 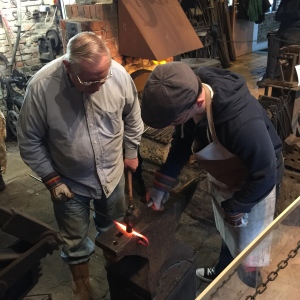 The project is proceeding well as we transition from the research and learning phase and visible assets are beginning to appear.
The Forge have been on a massive learning curve and are now beginning to master 3D printing. The Forge have also been able to secure additional funding and expect in January to create an innovation space and library which will house our HCVS and 3D printer. The Forge has also purchased an additional 3D printer and scanner.
The Forge is also developing its educational offering and will invite local teachers to a tell and share evening with purpose of creating an educational pack.

The University is making tremendous progress. They have solution as how to form the metal and this will now be included in the model. The visit to the Forge has now helped the students to understand this process.
The University hopes to have a prototype solution by the end of January and we have invited a couple of Blacksmiths from The Worshipful Company of Blacksmiths to evaluate it.
So we hope you will continue to monitor our websites and see the HCVS come to fruition.

This completed they photographed the inside of the Forge and translated its physical measurements into a 3D model which represents a Blacksmith working in Chain Bridge Forge. This model is viewable

in the Oculus headset and changes with head and hand movement giving a realistic representation of the Forge. The Blacksmith is positioned at the anvil to make an item. The next element of the project was to translate the hand movements of the Blacksmith to fashioning a piece of metal. Building this human interface has been a considerable challenge. However this has largely been accomplished. The next part of the project was to translate these hand movements into shaping a piece of virtual material which again has been achieved.

The element that is being worked on now is the integration of the components into a complete HCVS system. This work is on-going and the initial system should be ready within a month to start evaluation at schools.

Chain Bridge Forge has supported this project with Blacksmithing expertise, hands on experience, regular meetings and the initial dialogue with schools in the Spalding area. This has included both able and disabled young people and culminated in a twilight consultation evening where teachers came to the Forge on a cold January evening to experience what the Forge had to offer and give feedback. As adjunct to this St Francis school in Lincoln heard of our work and we are actively working with them to try and give their children an experience of our work.